Board-certified plastic surgeon, Dr. Armando Soto was born and raised in El Paso, Texas. His father was a respected general surgeon in the West Texas community and his mother was a nurse prior to "retiring" to raise her five children. His parents were a great inspiration to him and always encouraged him to pursue higher education. After graduating from Texas A&M University with honors and a degree in Microbiology, Dr. Soto was accepted to The Johns Hopkins School of Medicine. While studying there, he was inspired by the work of the surgeons in the Department of Plastic & Reconstructive Surgery and made the decision to pursue Plastic Surgery Training. After completing his education, Dr. Soto decided to bring his expertise to Central Florida in 2006, and since arriving in Orlando, he has made a name for himself as an extremely ethical, creative, skilled, and compassionate surgeon. In late 2007, Dr. Soto opened Aesthetic Enhancements Plastic Surgery, a state-of-the-art skincare, laser and surgical facility in the Doctor Phillips neighborhood of Orlando.

Dr. Soto specializes in all aspects of facial rejuvenation, breast and body contouring procedures including upper and lower lid blepharoplasty, face/neck lift, laser resurfacing, liposuction, tummy tuck, inner thigh lift, arm lift, torsoplasty (body lift), breast augmentation, breast reduction, and breast lift procedures. He is considered by many in Central Florida to be the plastic surgeon of choice for the management of complex breast implant problems and revision plastic surgery. His Mommy Makeover procedures also draw patients from all around the globe.

After high school, Dr. Soto attended Texas A&M University, where he earned a degree in Microbiology and graduated with honors in 1991. He was accepted to The Johns Hopkins School of Medicine and, believing this to be the opportunity of a lifetime, left Texas for Baltimore. Based on his record and the recommendations of the plastic surgeons at Johns Hopkins, he was accepted for training in the prestigious program at Washington University & Barnes-Jewish Hospitals in St. Louis, where plastic surgery was born in the United States.

Upon completion of his training in plastic surgery, he was accepted for an additional year of advanced training (a fellowship) in complex breast surgery, microsurgery, and breast reconstruction with Dr. Bernard Chang at The Center for Women’s Health and Medicine of Mercy Medical Center in Baltimore. Dr. Chang had been one of Dr. Soto’s mentors at Johns Hopkins so it was with excitement and pleasure that he returned to Baltimore for this advanced training available at only a few centers in the world. Dr. Soto’s training with Dr. Chang was shortened from one year to 9 months on the decision of the faculty that he was ready to proceed in his career and accepted their invitation to join the faculty of The Center for Women’s Health and Medicine. He spent the next 5 years on the faculty, training plastic surgeons and advancing the care of women in the mid-Atlantic area and surrounding states.

During his time at The Center for Women’s Health and Medicine, Dr. Soto was named one of the top "40 Under 40" by the Baltimore Business Journal, a listing of the most promising Baltimore professionals under age 40. This was an extreme honor, considering the extreme sophistication of the Baltimore-D.C. medical community.

In 2012, Dr. Soto was named one of only 100 doctors across the nation to receive the RealSelf 100 award, out of many thousands of board-certified plastic surgeons, dermatologists, and licensed cosmetic dentists. The award from RealSelf, the world’s largest consumer source for cosmetic surgery information was granted to Dr. Soto for his commitment to ensuring millions of consumers make informed decisions about cosmetic procedures.

Dr. Soto has also been named Orlando’s Best Plastic Surgeon by The Orlando Business Journal (one of the only such lists not based on financial contributions to the publication or professional politics), and has been among the 2-3% of physicians nationwide to receive consecutive awards from respected national sites Patient’s Choice and Vitals.com. He is particularly proud of these awards bestowed by patients.

In 2017, Dr. Soto was awarded the Vitals Compassionate Doctor 5 Year Award, which honors doctors who treat their patients with the utmost kindness - as reflected in their superior "Overall" and "Bedside Manner" ratings. 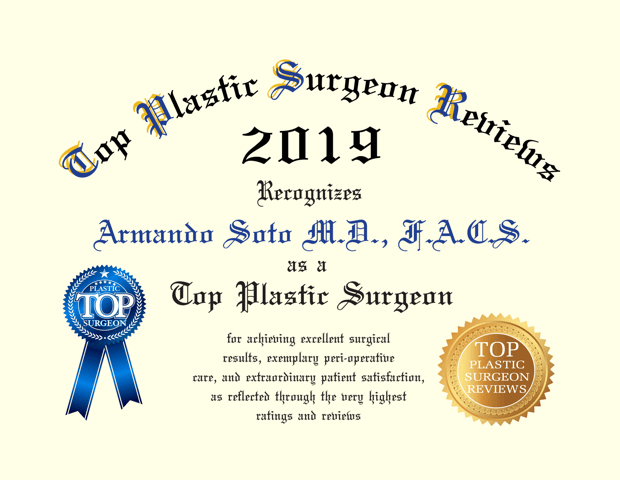 Dr. Soto believes the true nature of excellence is an unlimited desire and capacity for self-improvement. He is always advancing and continuing his education to provide the best service for his patients and to set a great example for his family. Dr. Soto lives with his beautiful wife and children in Windermere, FL. He is a doting father and husband who loves spending time with his family. When he is not at the office, he and his family travel and relax at their favorite local beach. He is also an accomplished amateur photographer and loves playing the electric guitar.

"Sceduled for March 10 - Orlando, FL - I have had 5 different abdominal surgeries including two c sections. I am tired of everyone even my mother sayin I look just fine, its just my stomach. I am tired of trying to work it off, cuz its not going anywhere. I called to make an appotment for the procedure today and the only day available is in two weeks. So I took it, and I put down my deposit. Now I am scared to death. I have wanted it for so long that now I feel overwhelmed. I am actually thinking of how many people could eat off the money I am spending on making myself look better. I am glad I only have less than two weeks to do this because i see I will drive myself crazy! "

"Implants and Reconstruction to Correct Previous Reduction - I used a doctor in Orlando and my experience was great. I got implants and reconstruction of my breast that had a square look after a previous reduction. The implant gave the round shape but were not to large. I do have beautiful breast now.The staff and the doctor make the visit feel very comfortable and the doctor is very confident, knowledgeable, and precise in his work. I am very happy with my results, and most of all, the doctor listens. "

"Mid 40s Wanting to Enjoy my Body the Way I Used to - Orlando, FL - I want to look good being able to go to the store and try the clothing and being able to find something that I like thinking on get a shape wear to look better. I'm 36 DD breast and my back is constantly killing my back and shoulders. I want a nice hour glass shape that help me to look good in most of the clothing not being worried of look will big belly. "

"Nice Butt - Orlando, FL - i have always been flat behind and hated the way i looked in clothes. for years and years i wore my clothes big to camaflage my figure. after about 3 years of researching a plastic surgeon. i decided to have my buttocks augmentation surgery. i am 52 years old and could not have spent my money in a better way. i had my surgery 2 months ago and have no regrets. the facility was a quad a facility. my doctor was a board certified plastic surgery. a board certified anesthesiolgist put me to sleep. 2 icu nurses to care of me before, during and after the surgey. the office staff was amazing and very professional especially sarah. i called my doctor at 3 o'clock in the morning 2 days after my surgery because my garment was itching my doctor answered his phone very nicely told me what to do and the garment has been fine every since. i had my surgery on a thursday, i reported back to the office monday and when my doctor came in he had flowers for me. my doctor was totally honest and realistic with me he told me what he could do and he did it. i don't have this big ghetto booty, but it is perfect for a woman my size and age, it also jiggle a little bit, i love it. i can't wait to go back for my post-op in january to take my after surgery pictures and to talk to him about a tummy tuck or abdominal plasty whichever one he thinks i need. "

"I Always Wanted Bigger Breast - Orlando, FL - From the day I realized my breast are what they are. I wanted them bigger. I did so much research for YEARS no Lie from the age 19-33 i looked for that Dr. With the best hands,straight to the point and Dr that I got that vibe off of that They where the one. DR. SOTO IS THAT ONE.HIS STAFF LOVE THEM TO "

Are There Requirements to Be A Candidate for Breast Augmentation?

A candidate for breast augmentation is in good health and has realistic expectations about results. See if you qualify for plastic surgery in Orlando.

Combine Two Body Sculpting Treatments In One With EMSCULPT NEO

EMSCULPT NEO can remove fat and build muscle at the same time. Learn the details of this advanced body sculpting treatment in Central Florida.

Can Forever Clear BBL Get Rid of Acne?

Forever Clear BBL is a noninvasive treatment that uses BroadBand Light energy in order to penetrate deep into the pores of the skin to treat acne.

Will A Fat Transfer Give You Natural-Looking Breasts?

A fat transfer procedure can be a great option for breast augmentation in order to preserve the natural look and feel of your breasts.

Dr. Armando Soto is a board-certified plastic surgeon in Orlando, FL, providing a wide variety of aesthetic surgeries for both men and women.

*Individual results are not guaranteed and may vary from person to person. Images may contain models.